Posted by sylvianeczkaLekudeczka in News 28 Apr 2018

The Chicagoland Italian American Charitable Organization is proud to honor Remo Turano as our 2018 Humanitarian of the Year. 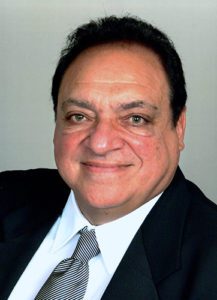 As a boy, Remo Turano helped out in his family’s bakery business. As a young adult, he instilled knowledge as a classroom teacher. As a young husband, he circled back to the family business, branching out into sweets and pastries.

He has been particularly generous in his support of the needy through the Chicagoland Italian American Charitable Organization, says board member Tom Reboletti. For that, CIACO is presenting Remo Turano with its highest honor.

“The selection committee made their decision based on Remo’s continued support of CIACO and the Italian-American community,” says the organization’s president, Robert Urbinati. “Remo was selected and graciously accepted to receive the Dominic Saverino Humanitarian of the Year Award at this year’s Honor & Hope Banquet on April 28.” “Every time you need something, Remo doesn’t hesitate to contribute,” Reboletti adds.

Turano hastens to point out that other CIACO members share the trait of generosity. “I’ve known most of these guys a long time and they’re wonderful people,” he says. “They’re all givers. They’re all good guys.” Most of them also share an Italian heritage, which for Turano started in Calabria. Turano’s parents, Attilio and Giosina, came from Castrolibero, near Cosenza, in 1956 when he was 4 years old. He earned a bachelor’s degree from DePaul University, and taught high school and special needs students in Leyden Township. “Teaching was a passion of mine at the time,” Turano recalls. “Then I got married and rejoined the family business.” He recalls working in the business when he was only 8 or 9 years old, helping his uncle Mariano, his father’s brother, deliver loaves of bread house-to-house out of his station wagon or van. Sometimes he would go with Mariano’s sons, Remo’s first cousins, Renato and Tony. It was a large family: Remo’s father had three brothers in the Chicago area and two more brothers and two sisters in Italy.

“The selection committee made their decision based on Remo’s continued support of CIACO and the Italian-American community.”

When Remo rejoined the business as an adult, he concentrated on sweets and pastries, watching and learning from bakery employees who had emigrated from Sicily. By 2008, Turano and his brothers, Egidio and Marco, spun off the sweets end of the operations into a separate entity, which they called Chicago Pastry. “We’re still together as a family, and we share a lot of the same information,” he explains. “I wanted to go my own way with Chicago Pastry, but we’re still involved as sister companies.” In addition to his work, Turano has given back by serving on the board of Calabresi in America Organization and as chair of the Bloomingdale Business and Cultural Development Committee. Turano and his wife, Janette, have three children. Peter and Jenna work with their father at Chicago Pastry, with Peter overseeing sales and Jenna handling retail, social media and the website. Another son, James, works in the banking industry. Remo has two grandchildren, Matthew and Noelle.

Remo sees his charitable work as part of a grand family tradition. “I want to be involved with organizations that are doing charitable work, and I want to teach that to my kids, too,” he says. “I learned that from Turano Baking — from all the charities we contributed to.”

CIACO raises funds mainly through two annual events: a gala and a golf outing. It awards $2,500 scholarships to 15 to 18 students annually. It also awards funds to the families of veterans going through challenges, as well as other needy families. At Thanksgiving nears each year, CIACO distributes about 600 baskets of food to families in need.